Home In the garden Archive by category "Spring" (Page 2)

Oh what a difference a month makes. Back in the UK, after inspiring green travels far afield, a walkabout in the garden reveals it has been blooming busy in my absence.

On first inspection, yellow predominates. The last of the daffodils are waving their nearly spent trumpets, clumps of wild primrose (Primula vulgaris) are holding their  faces aloft with gentle but confident beauty, and the Forsythia is full to bursting with sunny floral joy. 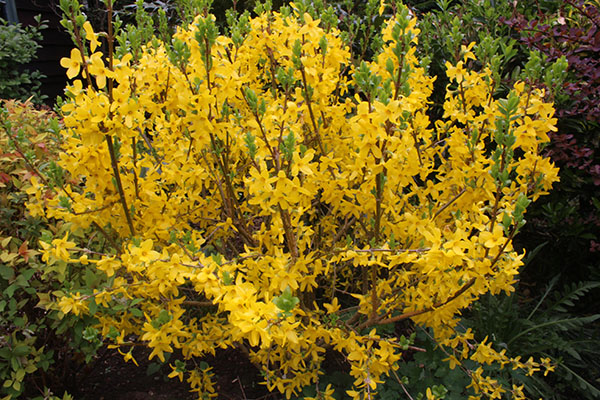 Forsythia brings sunshine into the garden whatever the weather

Alice may be celebrating 150 years since her extraordinary adventures, but I wouldn’t swap her wonderland for mine … 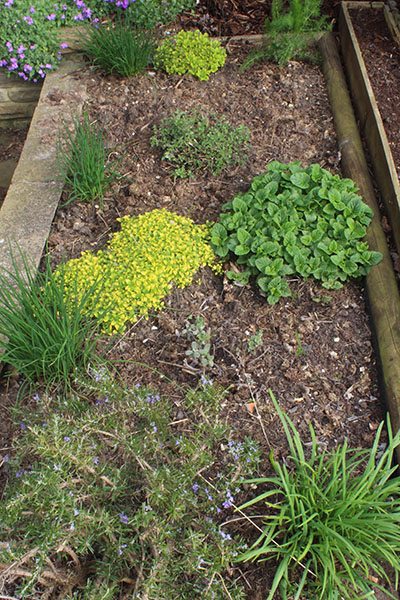 The herb garden is springing back into life, with chives, oregano and lemon balm already ready for use in the kitchen 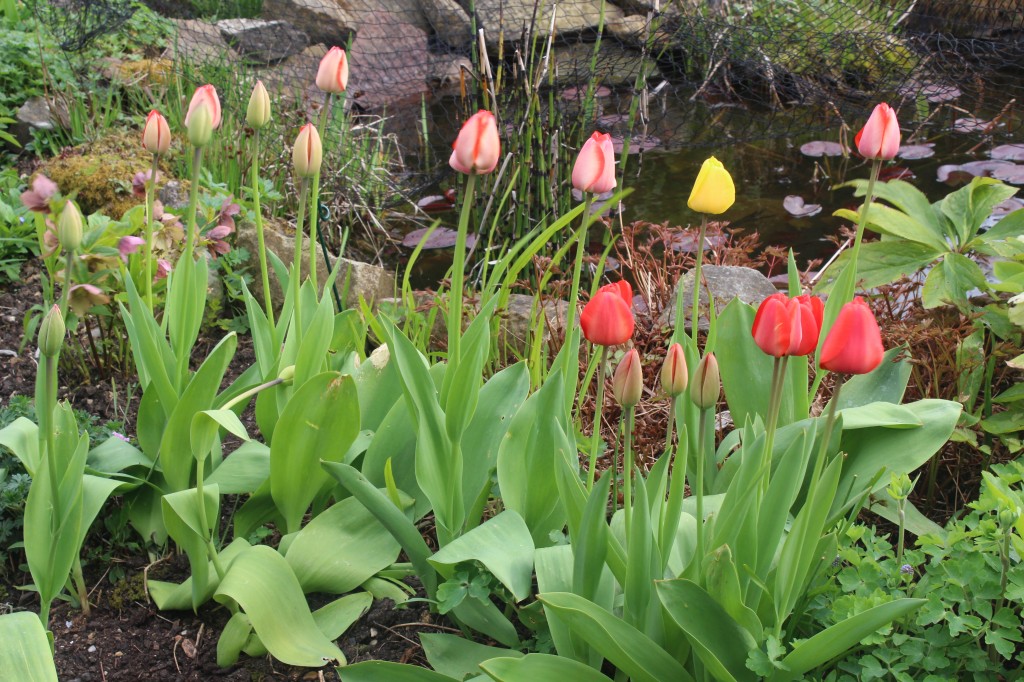 The early unfoldings of tulips splash the garden with vibrant colour 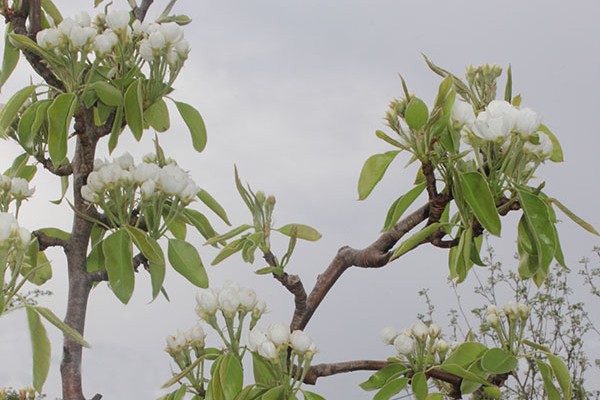 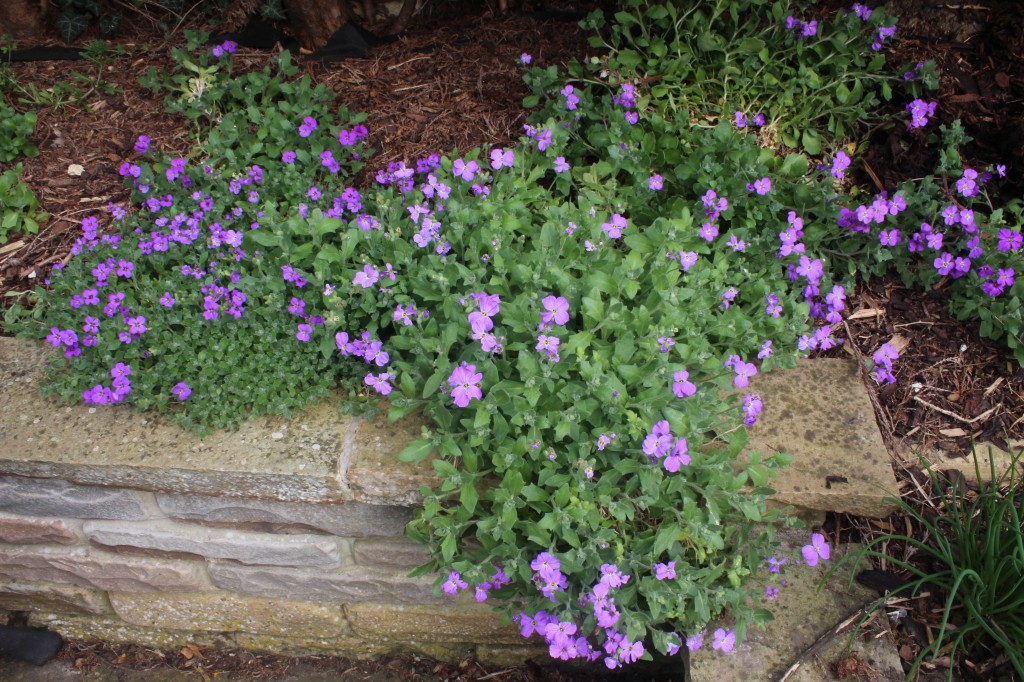 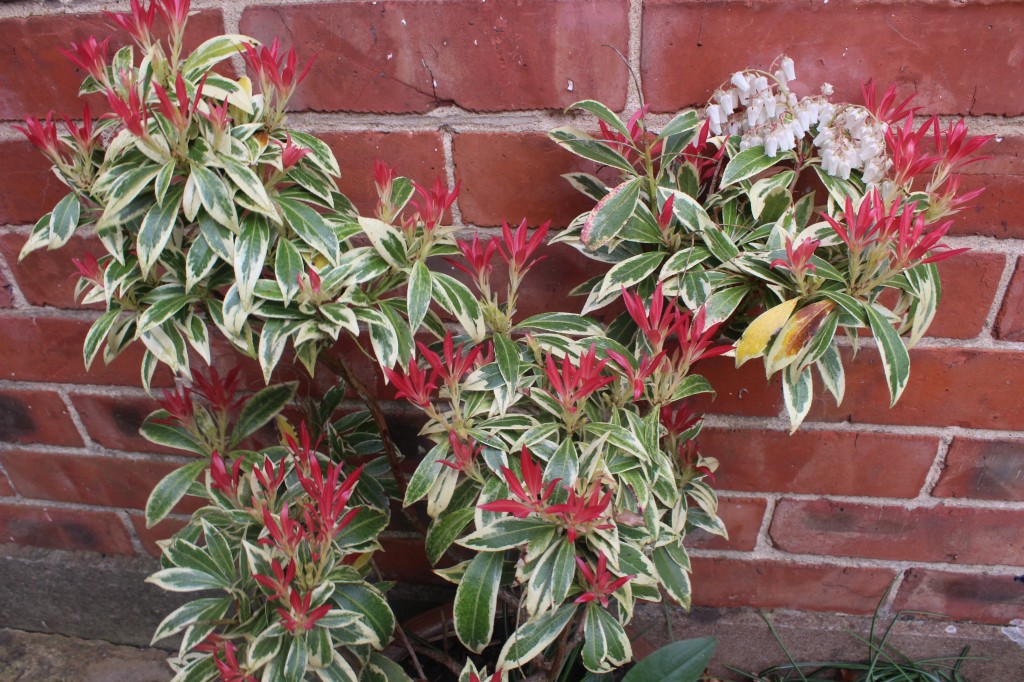 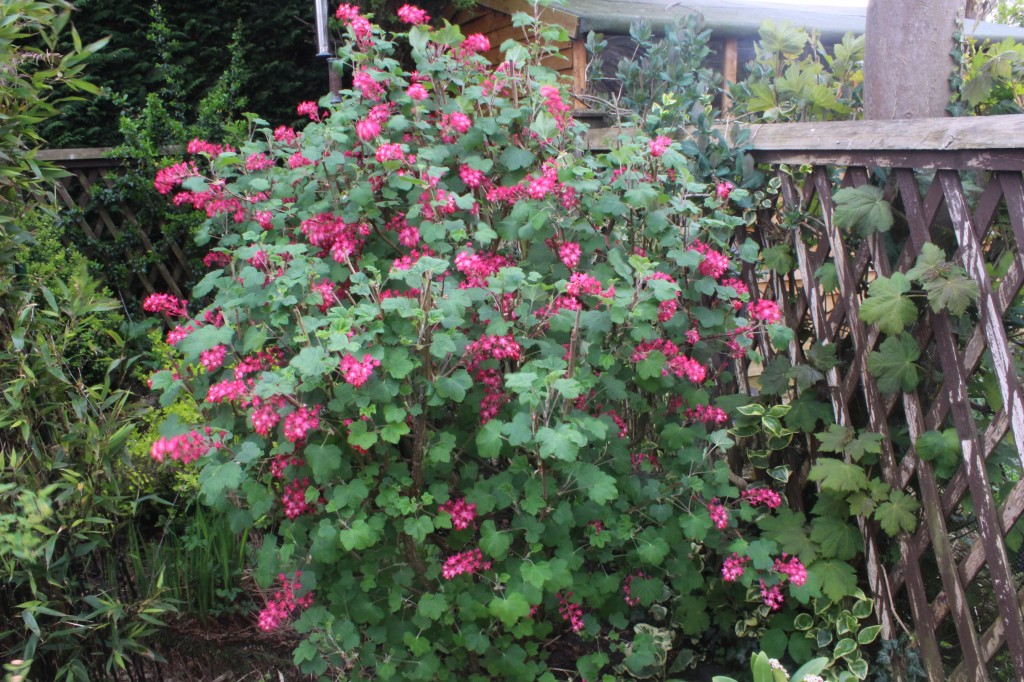 The flowering currant (Ribes sanguineum) is most definitely flowering

Then there is the ever-consistent hellebore. It is the plant that keeps on giving: from the first splash of colour in an otherwise grey canvas in February to the heavily nodding blooms that continue to vie for attention in the crowded borders around my pond today. 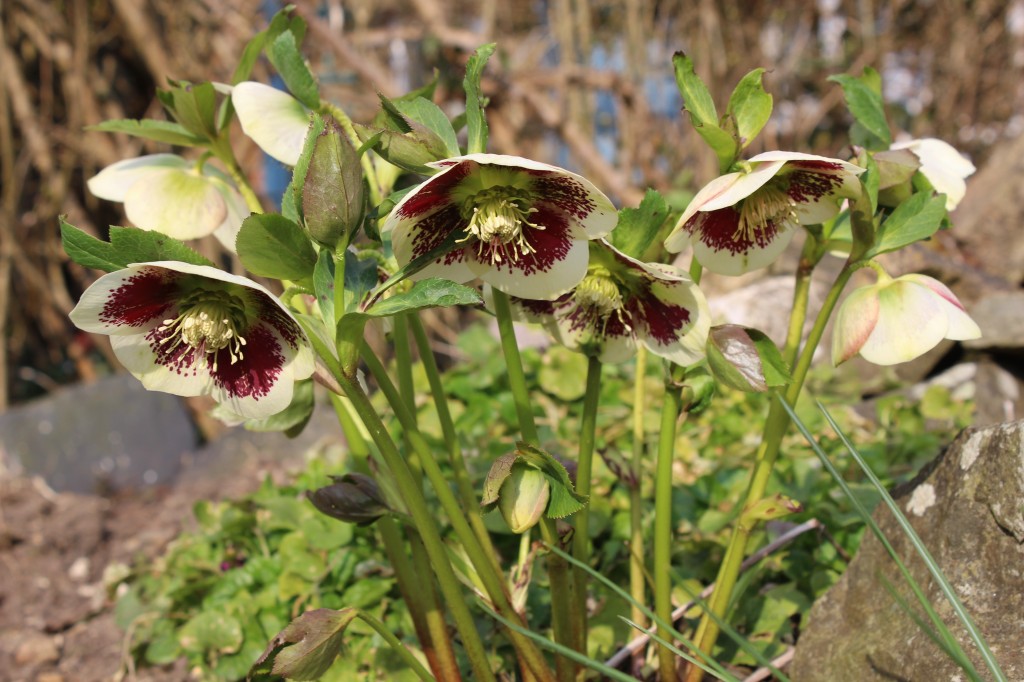 A Christmas rose is not just for Christmas!

And it’s not just the flora making me smile. Before we went away, we knew that a pair of robins were making a home in a nest box nestled in the ivy opposite our kitchen window (see Watch the birdie). On our return, it was clear from the non-stop industry of the adults that incubation was over as they were already feeding their offspring. 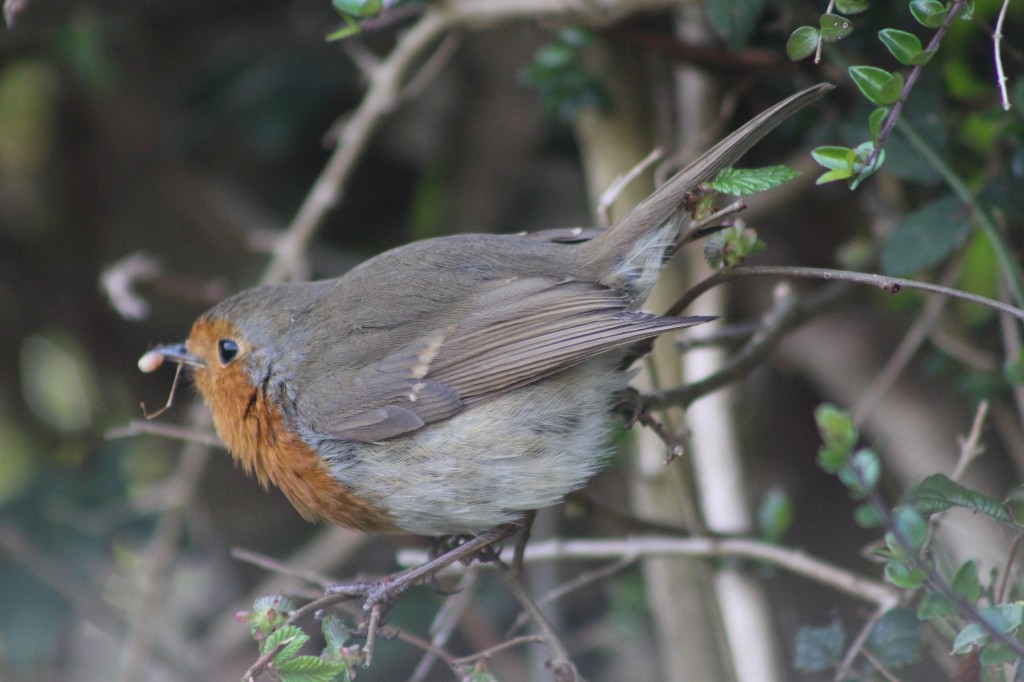 A busy robin taking food back to the nest

So we’ve been keeping our eyes out for signs of the youngsters, and they have obliged in spectacular fashion, with 3 faces regularly peeping out of their increasingly cramped abode. Most broods tend to have a dominant sibling, and ours is no exception.

So what better name than ‘Alice’ as she becomes ‘curiouser and curiouser!’ about the wonderland that awaits her. In fact, her curiosity has almost resulted in fledging a little ahead of schedule. 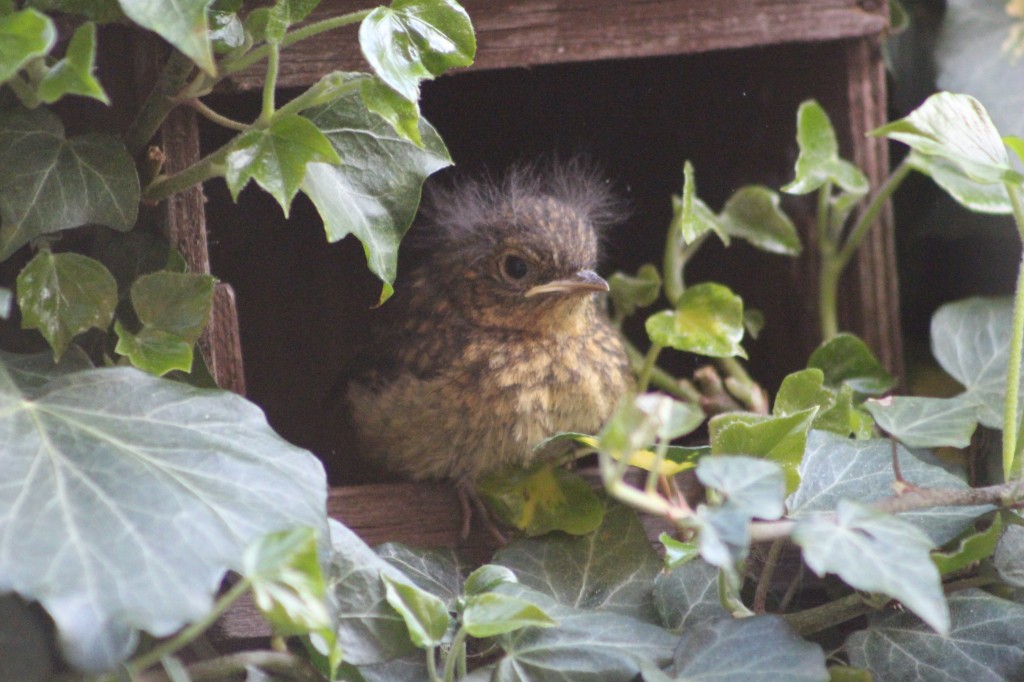 First, she decided to get a better perspective on the world outside her nest 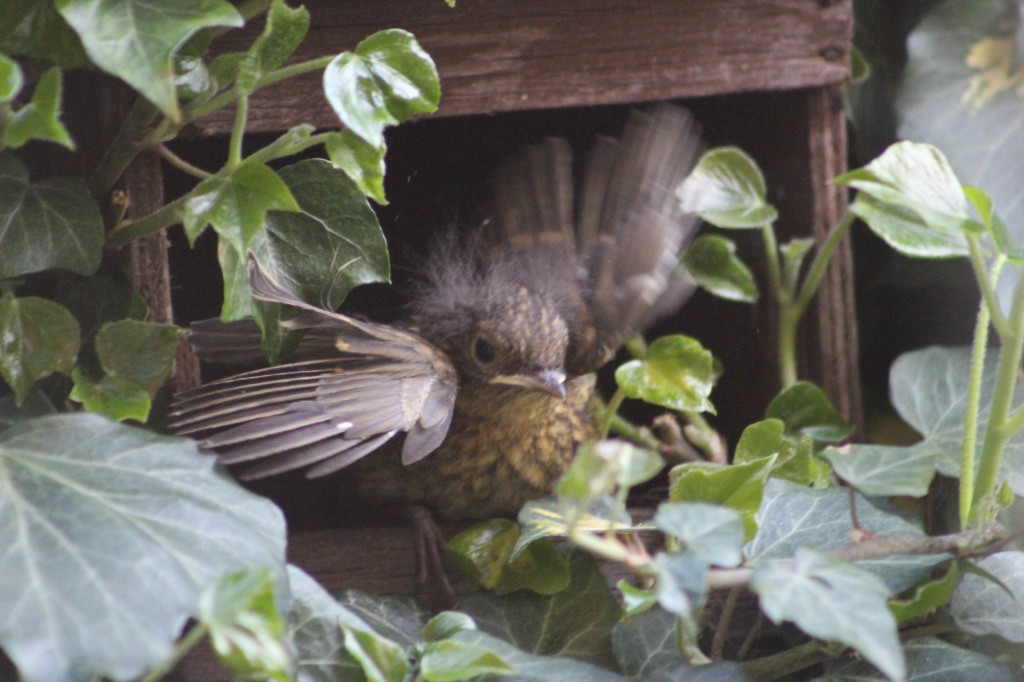 Then she tried out her undeveloped flight feathers … and nearly fell out!

It doesn’t look like it will be long before Alice and her slightly less inquisitive siblings fledge, and as they will be unable to fly for a couple of days I shall have to go on cat alert.

So, now that I’ve got all the holiday washing out the way and we’re getting back into a regular routine, the hard work really starts. There’s lots of sowing and sorting to be done, but I can think of worse chores! 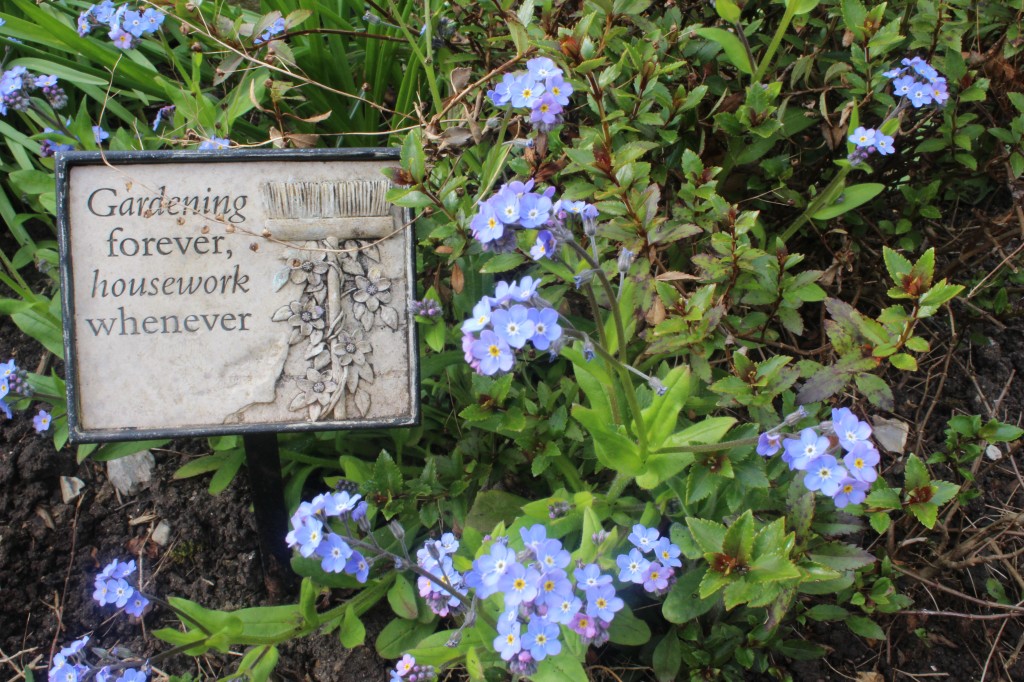 Last autumn I collected a few lupin seeds from the desiccated pods of the plants in my perennial border. I stored the seeds in envelopes (protected from mice in a tin) in the shed, where they stayed cool and dry over winter.

Come sowing time, I googled what to do with the lupin seeds, but came up with conflicting advice. Some sites simply said sow them (helpful!), some recommended scarifying the seeds with sandpaper first, others suggested soaking the seeds for 24 hours, while others advised sticking them in the freezer to break dormancy.

To soak or not to soak …

So I decided on a little experiment, soaking some overnight and sowing the rest dry, to see if there was any difference in germination success. (Next year I might try the scarifying and the freezing too.) 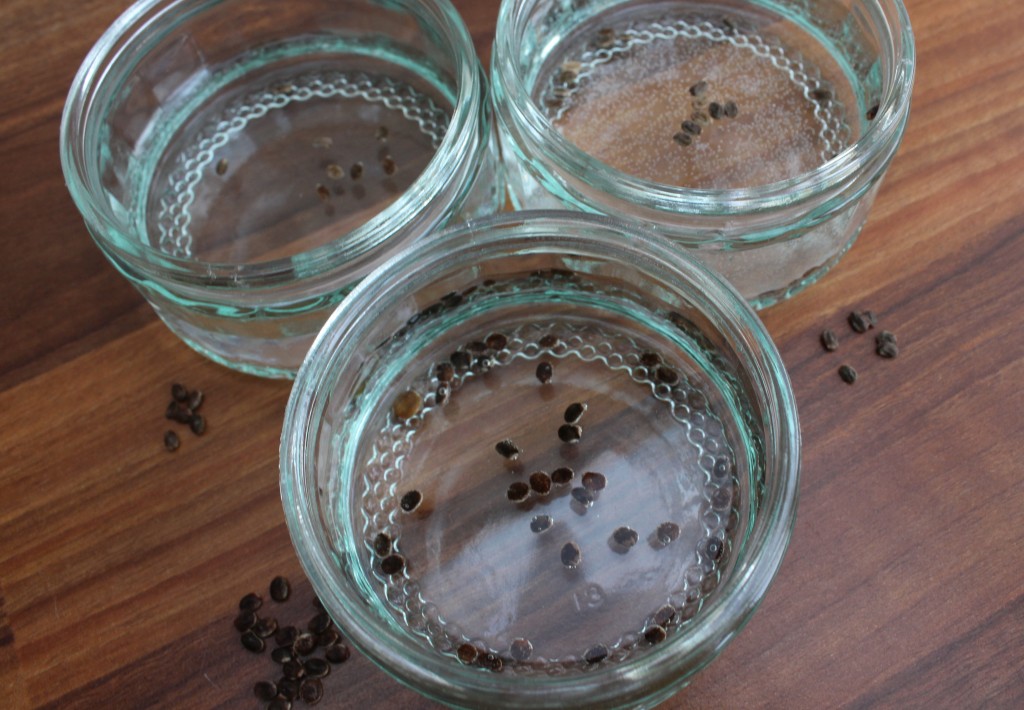 To soak or not to soak … that is the question

I’ve labelled the seeds 1, 2, 3 and 4, depending on what plant I originally collected them from (by the time I collected the seeds I couldn’t remember the colours of the lupins!), and ‘D’ or ‘W’ depending on whether I sowed them ‘dry’ or ‘wet’ (pre-soaked). Then I’ve sown them all in the same way, two to each small pot with just a few millimetres of potting compost on top, starting them off inside and keeping them moist. 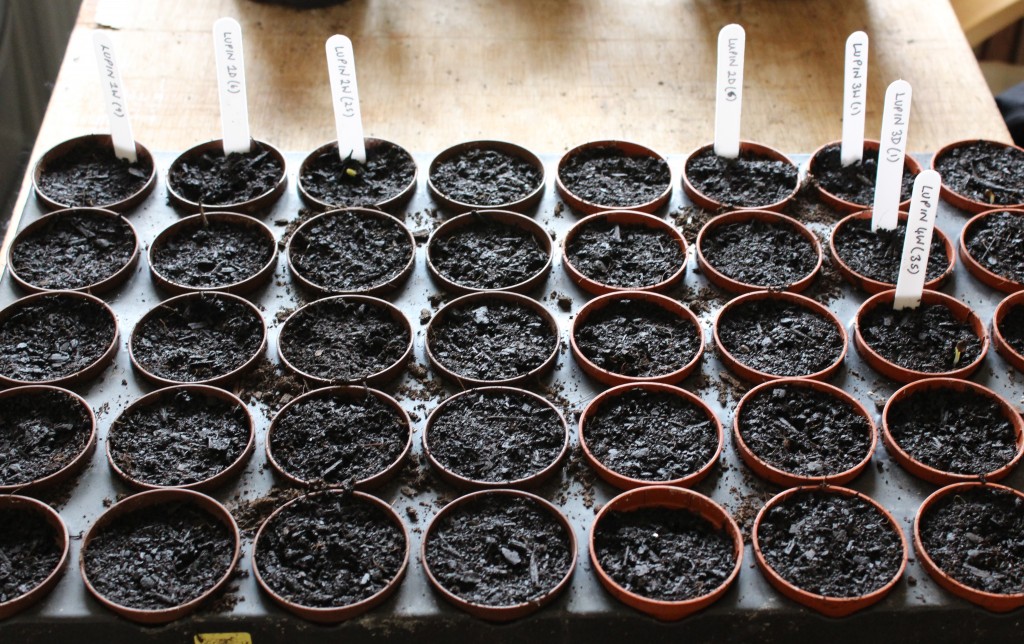 I’ll report on the findings. In theory, the pre-soaking should improve the germination success rate, but as Sod’s law would have it, the first seed to germinate was a ‘dry’ one. 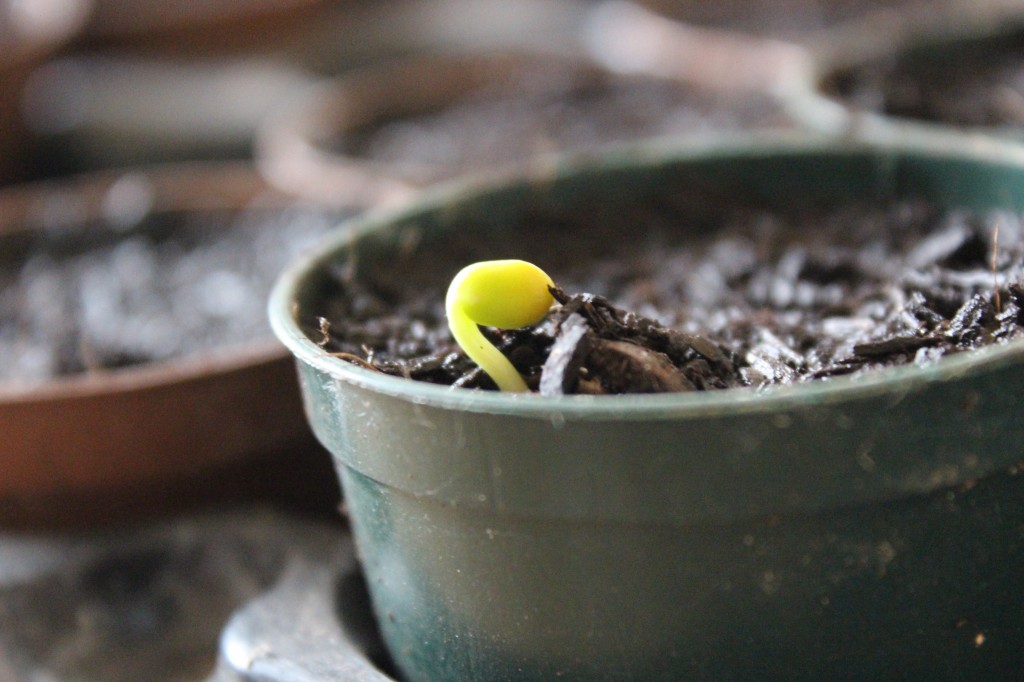 And the winner is … first to emerge is a ‘dry’ seed

In the meantime, I’m delighted to report that the three lupins I lifted from the garden at the start of winter have thrived in my tiny makeshift greenhouse. I don’t usually have much success overwintering lupins in the garden – they usually rot in the ground and rarely get going again in spring, so I thought I’d see if I could keep them going over winter under cover instead. When I lifted them in November last year they already looked pretty dismal, so I wasn’t  expecting much. But it worked! 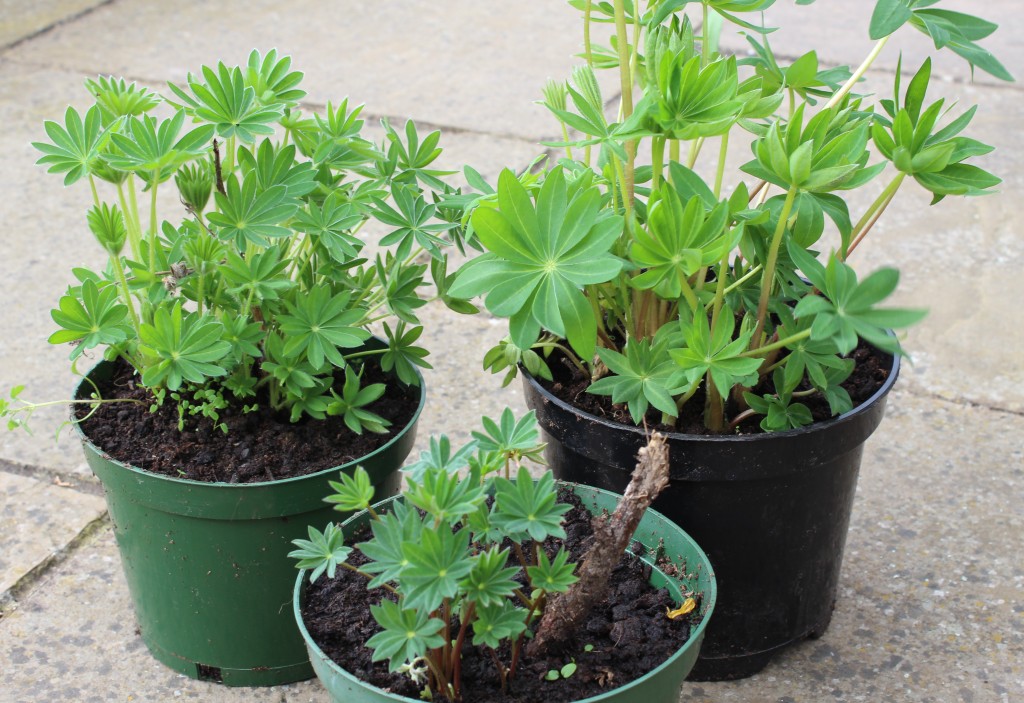 Having said that, the one lupin I left in the border (as it already looked pretty dead at the time) has also started to grow. We’ve had a pretty mild winter, so it had a fighting chance. 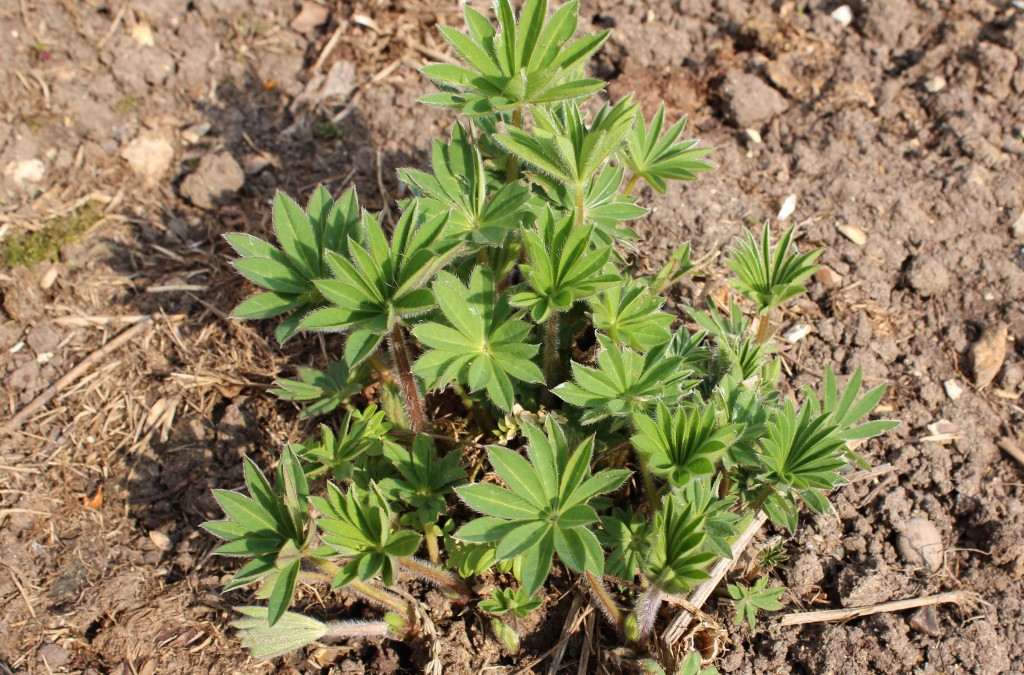 Lupin winter survivor – a first in my garden!

All in all, the garden should be lupintastic later this year!

Monday mornings are always a struggle for me, but as I brewed the first of several mugs of tea this morning I spotted movement in the ivy opposite the kitchen window. What a joy to know that robins have returned to our recently cleared nest box! 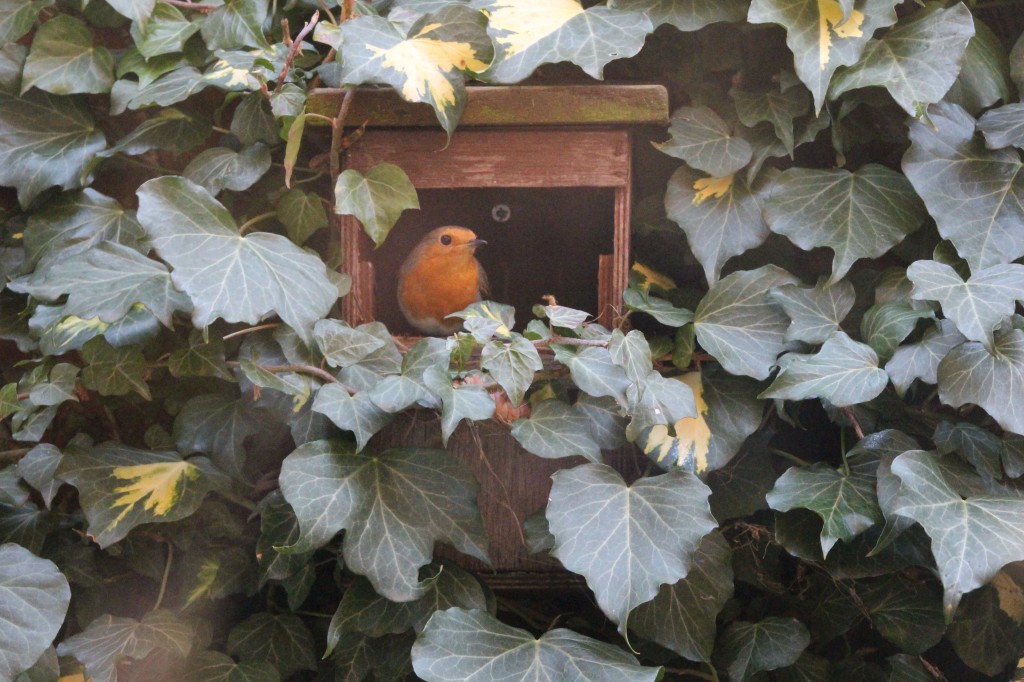 At present, the female is busy toing and froing with leaves and moss; she will do all the nest building, but the male is close at hand, and will be supplying her with food while she toils (‘courtship feeding’).

Meanwhile, we also have a wonderfully entertaining flock of 50+ house sparrows (Passer domesticus) in our garden. It’s hard to put an exact figure on their numbers, as they are constantly on the move between the bird feeders and hawthorn tree, the flowerbeds and hedges, the shed roof and pond, exploring every inch of their domain. 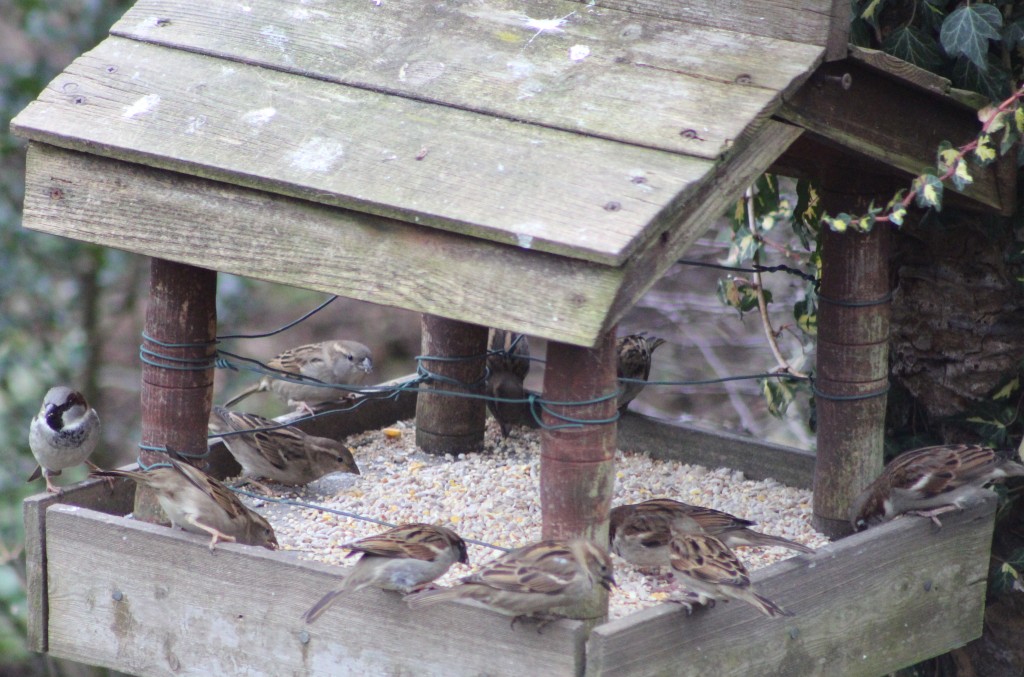 These gregarious little birds start chattering at dawn under the eaves of the house, and their noisy squabbling rarely abates before dusk. It is fascinating to watch the different ‘characters’ in action, such as the bolshy males who assert their authority over the feeders (until a starling or woodpecker arrives on the scene!), or the younger, more curious, members of the flock, who are fascinated by pretty much everything, especially the glass roof of our conservatory. 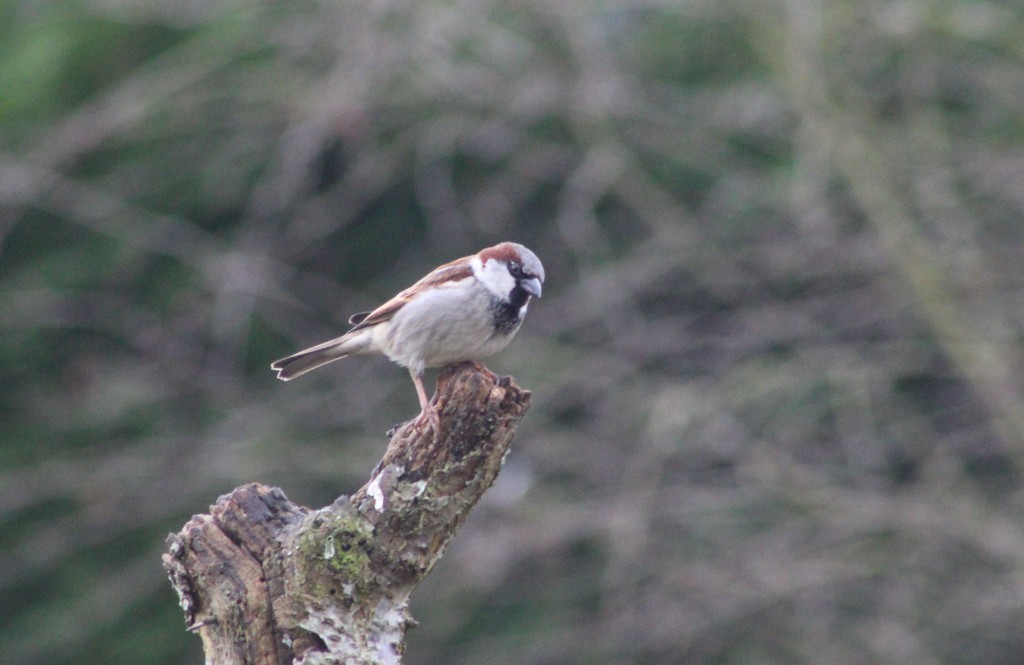 Strangers in our midst

A few weeks ago some unusual behaviour caught my eye: a stand off between a robin and a male house sparrow over a ground feeder (or so I thought). The robin was getting stroppy and, unusually, the house sparrow wasn’t backing down. I’ve seen male house sparrows throw their weight around within their ‘family’ groups, but rarely with other species, so I picked up the binoculars to see what was going on. Imagine my surprise to find out we had a male reed bunting (Emberiza schoeniclus) in our midst: very similar to a male house sparrow from a distance, but that characteristic white drooping ‘moustache’ meant it could be nothing other than a reed bunting. 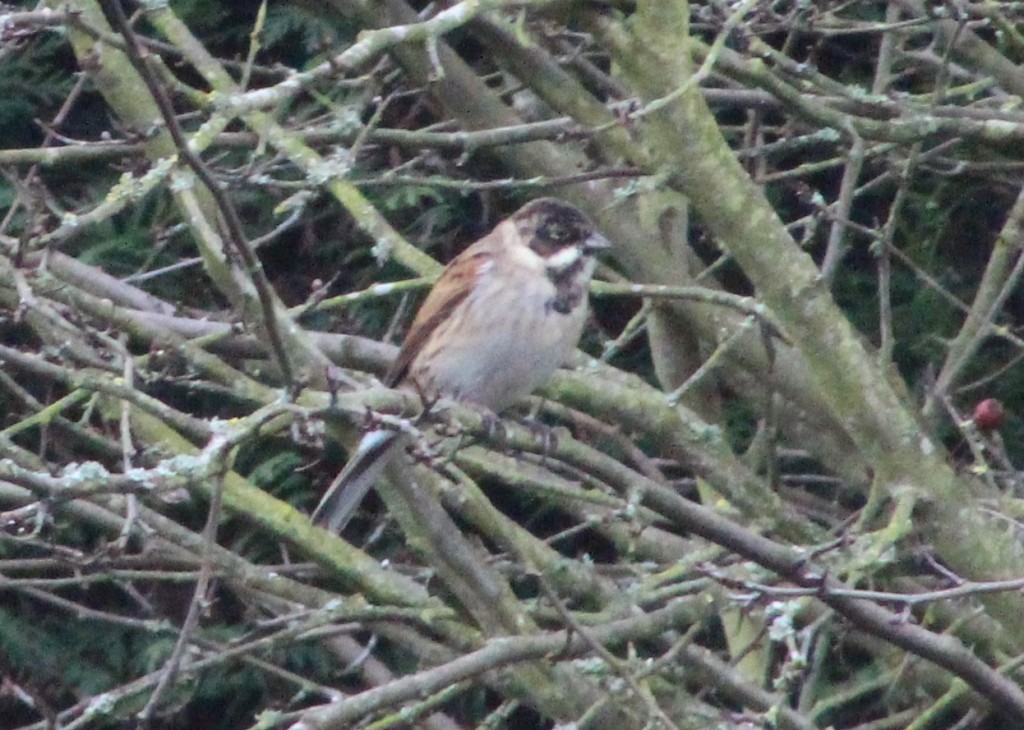 He’s been a regular visitor for a few weeks now, never coming too near the house and too wary to join the larger groups of house sparrows on the bird tables. Instead he has been feeding alone on a caged ground feeder on the lawn or in the company of a  few select sparrows on a log at the bottom of the garden. And this week, a female joined him. I could easily have mistaken her for another female house sparrow, but there was that tell-tale moustache again! 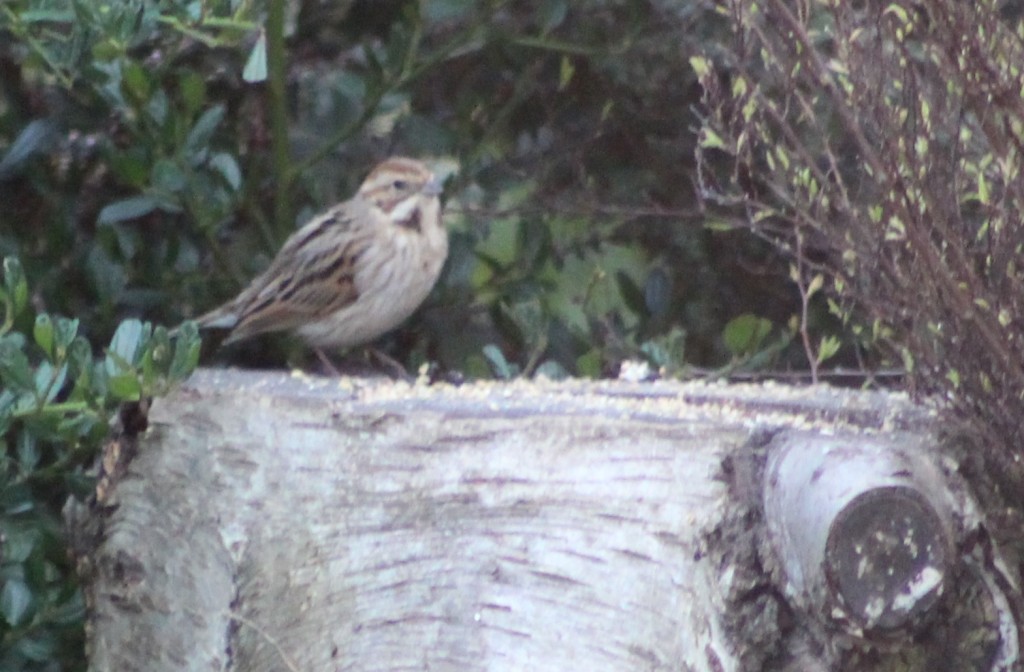 Female reed bunting, feeding in isolation away from the house

Traditionally birds of reed beds and wetlands, it’s a real treat to have them in the garden for a little while. No doubt they’ll be moving on to a suitable nest site soon.

And it just goes to show, you might think you know which birds are frequenting your garden, but it’s worth picking up the binoculars from time to time just to make sure, especially if you notice any ‘out-of-character’ behaviour.