Home In the garden Chit chat

Do you chit your seed potatoes before planting? Most amateur gardeners and allotment holders do – mine have currently taken over a window sill in an unheated bedroom – but most commercial potato growers don’t bother.

Seed potatoes with no visible shoots will start to chit from the ‘eyes’ when exposed to light and warmth. Any frost-free space should be fine (greenhouse, porch, conservatory, garage), although I had to rethink putting mine in the garage this year, as last year the mice found them and undid a lot of good chitting!

Light is the key to success. If potatoes start to chit in the dark they produce long, brittle, translucent shoots, which won’t give very good results. Unfortunately, my second earlies (Maris Peer variety) had already started this process in the bag, so it will be interesting to see if they produce a noticeably lower yield than the other crops.

Place your seed potatoes in a single layer with a large amount of eyes facing up. Egg boxes are the ideal container for chitting, but I always forget to save them (most of mine end up in the compost as part of my ‘brown material’ quota). So until I buy more eggs I’m making do with some plastic fruit punnets and kitchen towel (very Blue Peter). Seed trays with scrunched up newspaper in the bottom to hold the potatoes upright will do just as well.

Once the potato has produced 2-4  sturdy green sprouts of 2-3 cm in length, it’s ready for planting. The more chits you leave on, the more potatoes you’ll get, but they’ll be smaller. As a general rule, leave 3 or 4 chits, and rub off the rest. With fewer sprouts sharing the nutrients in the soil, you’ll get bigger but fewer potatoes. More small potatoes, or fewer large potatoes – one of the great dilemmas in life(!) – it’s entirely up to you. 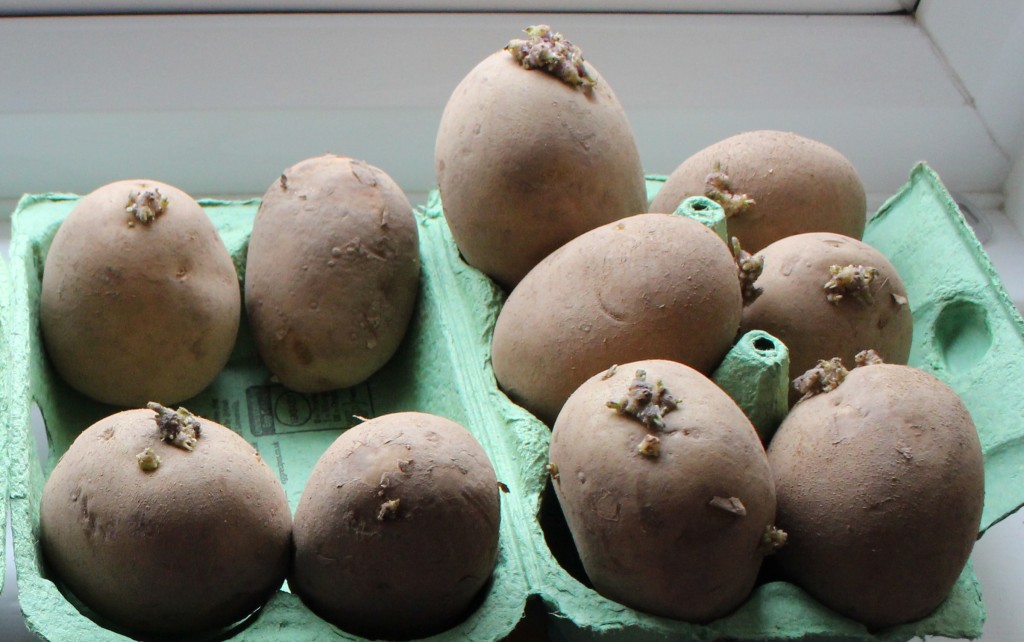 Watching a potato chit is a lot less interesting than watching a kettle boil (especially as I’ve got a lovely new glass kettle with a shiney blue light … but I digress). Chitting can take 4-6 weeks, so leave your potatoes to chit in peace and start planning the rest of your vegetable patch.