Take my advice: if you see signs of disease on a plant, act on it straight away before it gets worse. Last month I noticed individual bright orange spots on several leaves on my conference pear tree … and I ignored them. 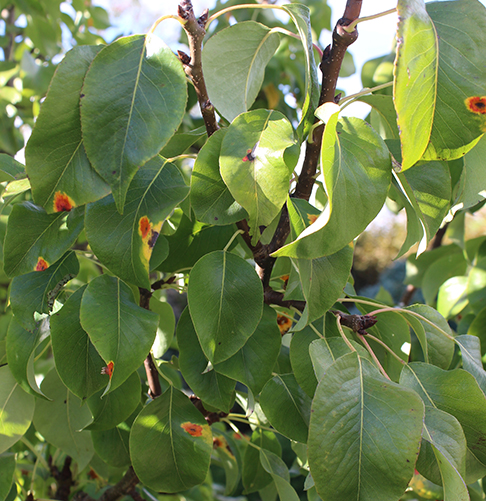 One month later, I realised that almost a third of all the leaves on the tree were sporting this season’s colour – rusty orange-red!

On closer inspection I found some rather gruesome brown, gall-like growths on the corresponding lower side of each leaf, with alien hair-like projections. 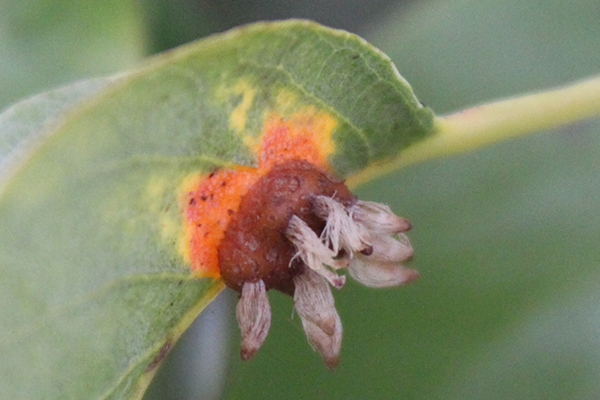 Ew! Warty gall on the underside of the leaves with hair-like projections

With the help of Mr Google, it wasn’t difficult to identify: European pear rust, caused by the fungus Gymnosporangium sabinae.

Apparently, fungal rusts need a living host at all times to survive, so the life cycle of this particular nasty requires two host plants. This summer/autumn, my pear tree has played host to the fungus. Normally, it would then release spores from the underside of the leaves and restart the party on a neighbouring juniper tree. Being evergreen, the juniper would harbour the fungus though the winter, releasing spores in summer to reinfect my pear tree.

I can only hope that by painstakingly removing all the infected leaves (yes, I got on a ladder and cut off and binned every last one of the little blighters) that I have broken the cycle, but of course I may have been too late and spores may already have been released. If the culprit juniper is infected again, then my tree might well get reinfected next year and so the cycle will continue. As it is unlikely that I will be able to track down the culprit juniper, I will have to be more vigilant next year and tackle any infection as soon as it materialises.

If left unchecked, heavy infections can reduce the yield of fruit, and I have had noticeably fewer pears this year. More worryingly, the infection can cause cankers in the bark (isolated dead areas), which can make the tree more susceptible to bacteria, fungus and insect attack.

There is no suitable fungicide available to home gardeners if you want to consume the fruit off your tree. And why have a pear tree if you’re not going to eat the pears?!

So all you can really do is try to break the cycle of  infection by removing as many of the infected leaves as possible and putting them straight in the dustbin or burning them. I appreciate that if you have a huge old pear tree this might not be practical (mine is only 4 years old). 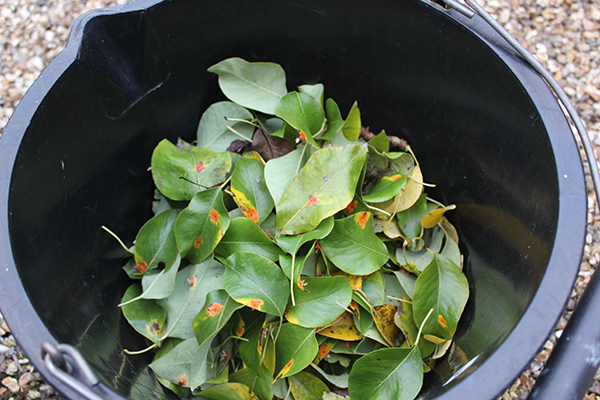 Bin or burn the affected leaves

Fastidiously clear all the dropped leaves from under the tree as well. If your tree has got canker, then you’ll need to cut it out of the bark. I’m hoping I won’t get to that stage!

A healthy tree will fight off infection more effectively, so I will also be clearing around the base of my tree, and giving it some TLC over the next few months, including a good autumn mulch, a winter wash and an early spring feed. I will, of course, also ensure that it gets plenty of water, as we’ve had an exceptionally dry October so far. I’ll also be pruning the tree this winter to avoid overcrowding in the crown and improve the airflow through the branches.

Unfortunately, there has been a steady increase in pear rust in the UK over the past 10 years. In order to get a better picture of distribution, the RHS is asking anyone who comes across the disease to report it via its online survey.

If you’ve had a problem with pear rust, please let me know, especially if you have any extra tips for tackling it. Let’s hope next year brings less rust and more pears!